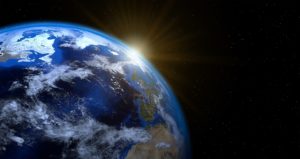 Geography studies starts with the study of universe and planets .Planets  are a celestial bodies orbiting a star . In 2006, the International Astronomical Union officially adopted a resolution defining planets within the Solar System. This definition has been both praised and criticized, and remains disputed by some scientists.Some of the planets are part of the Solar System which consists of the Sun and the astronomical objects gravitationally bound in orbit around it. The four smaller inner planets, Mercury, Venus, Earth and Mars, also called the terrestrial planets. The two largest, Jupiter andSaturn, are composed mainly of hydrogen and helium; the two outermost planets, Uranus and Neptune.