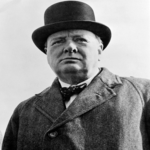 Winston Churchill was born upon 30 November 1874, in Blenheim Palace at Oxfordshire. His father, Lord Randolph Churchill, was descended from the First Duke of Marlborough. And Clementine Churchill was his wife. Although achieving poor grades at school, his early fascination with militarism saw him join the Royal Cavalry in 1895. He was a British politician, army police officer, and author. As a soldier and also part-time journalist, Churchill travelled commonly, Cuba, Afghanistan, Egypt and also South Africa. He was Prime Minister of the United Kingdom from 1940 to 1945 and also again from 1951 to 1955. As Prime Minister, Churchill led Britain to success in Europe in the World War II. Churchill was elected as Conservative MP for Oldham in 1900. Sir Winston Churchill won the Nobel Prize for Literature in 1953 for his six-volume history of World War II.

Churchill died in 1965 and was honoured with a state funeral.

Test your knowledge on Winston Churchil