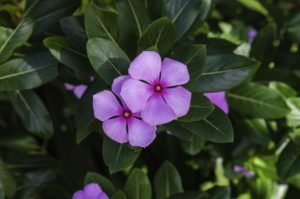 The periwinkle (scientific name :Catharanthus roseus G. Don)  is a perennial herb also known as Sadabhar plant in India , or Madagascar periwinkle, rose periwinkle, or rosy periwinkle. It grows to about 2 feet. 2 It is highly branched and develops a woody base. The periwinkle flowers can bloom throughout the year, depending on the climate. The plant of Periwinkle  is considered native to the West Indies, however , since it was first described in Madagascar. ,people attach Madgascar as its origin.

Medicinal Use of Periwinkle plant

Periwinkle has alkaloids which have been used in the treatment of various kinds of cancers- prominently leukemia, .Other diseses in which medicine out of this plant are used to cure are -Hodgkin’s disease, malignant lymphomas, neuroblastoma, Wilms tumor, Kaposi’s sarcoma, mycosis fungoides. It is also used to improve cerebral blood flow, and treat high blood pressure.

Set of 5 Quizzes on Periwinkle Plant