10 Mango Facts You Will Love To Know !

10 Mango Facts You Will Love To Know ! 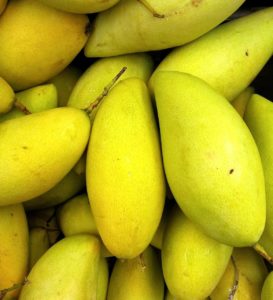 Mango season has arrived, so we have already incorporated a general knowledge test or quiz on Mango and now presenting before you ten fantastic knowledge enhancing questions and answers on the king of fruit -Mango. So here are

1. Which continent is considered originator of Mango?

Asia and more particularly  South and South East Asia. India is in the center of its origin.

2. Which language is considered the originator of word Mango

Malayalam is considered the mother of word Mango. As per wikipedia.org
“The English word “mango” (plural “mangoes” or “mangos”) originated from the Malayalam word māṅṅa via Portuguese (also manga) during spice trade with Kerala in 1498. The world’s first recorded attestation in a European language was a text by Ludovico di Varthema in Italian in 1510, as manga;”

3. Which country is a second largest grower of Mango after India?

China is the second largest grower of Mango. The Food and Agriculture Organization of the United Nations estimates worldwide mango production at 42 million metric tons in 2012 (table below). India is the largest producer of mangoes with 36% of the world’s production. China comes after

4. Which chemical was being produced in India from the urine of cattle fed mango leaves to cattle?

Indian Yellow also is known as euxanthin is a xanthoid chemical. It is primarily used in oil painting. Indian yellow pigment is claimed to have been originally manufactured in rural India from the urine of cattle fed only on mango leaves and water. The urine would be collected and dried, producing foul-smelling hard dirty yellow balls of the raw pigment, called “purree”. The process was allegedly declared inhumane and outlawed in 1908, as the cows were extremely undernourished, partly because the leaves contain the toxin urushiol which is also found in poison ivy. [source Wikipedia]

5. Portuguese are considered to introduce one of the most valuable mango varieties in India. Which one?

Alphonso, one of the best variety in India also known as Hapus was developed by Portuguese. As per Wikipedia entry, t variety of mango called Alphonso ” is named after Afonso de Albuquerque, nobleman and military expert who helped establish Portuguese colonies in India. The Portuguese introduced grafting on mango trees to produce extraordinary varieties like Alphonso. The fruit was then introduced to the Konkan region in Maharashtra, Gujarat and parts of south India.”

6. In which state of India, Mughal Emperor Akbar is credited to plant 1,00,000 Mango trees?

As per recorded history, Emperor Akbar planted 1,00,000 trees in Darbhanga which is in the state of Bihar in India.

7. Which three countries declared Mango as its National Fruit?

8. Out of hundreds of cultivars of Mango, which one dominates the worldwide market?

The current world market is dominated by the cultivar ‘Tommy Atkins’, a seedling of ‘Haden’ that first fruited in 1940 in southern Florida.

9. What nutrients are found highest in Mango?

10. In 18th Century America, the word Mango means a verb meaning “To Pickle ” Why?

It is considered that mangoes were first imported to the American colonies in the 17th century, in form of a pickle due to lack of refrigeration. Other fruits were also pickled and came to be called “mangoes”, especially bell peppers, and by the 18th century, the word “mango” became a verb meaning “to pickle”.